As a young girl in Vietnam, Lan Cao’s father blessed her by purchasing hundreds of sparrows, placing each one on her head, and releasing it.  A devout Buddhist, her father believed in a concept of karma deeply rooted in Vietnamese culture.  Liberating the birds in this manner, according to his faith, created a “karma bank” for Lan against which she could later borrow.    This was one colorful way in which Lan’s father endeavored to teach her the importance of benevolence and generosity as fonts of positive karma.

The ‘lesson of the birds’ has served Professor Cao well throughout her extraordinary life and career.  She has become one of the nation’s most influential international economic development and business transactions scholars.  Leaving war-torn Vietnam as a child and forging a new life as an immigrant have shaped her scholarly path and given her unusual insights into the plight of developing countries.

Cao attended Mount Holyoke College and Yale Law School.  Initially, her undergraduate studies, a year working for a community service organization in Washington, DC, and her own personal history and experiences fostered an interest in dispute resolution.  “I wanted to study ways to resolve disputes other than war,” she recalls, “and studying the rule of law seemed the best way to achieve that.”  Substantial college debt and the desire for financial security also influenced her decision to attend law school, she jokes.

Working as a private litigator when the Berlin Wall collapsed, Cao was struck by the incredible challenge of restructuring a country that had been devastated by war and then became calcified under communism.  She realized that her true calling was transactional work.  “I wanted to broker deals to build things and put countries back together, rather than litigate after it all fell apart.”

“The big mystery of economic development,” Cao notes, “is how do you get capital back into a country that has none?”  When a country has fully severed itself from the world economy, and created an isolationist, anti-market regime, how do you get that country back into an international economic system?

Cao outlines four ways to inject capital into a nation coming out of isolation.  First, there is domestic savings.  Japan, for example has a very high individual savings rate, so it can meet investment capital needs without looking beyond its borders.  For a variety of reasons, not the least of which is poverty, many nations’ savings fall far short of their capital needs.  Such countries must look to external sources of funds.

The second source of capital is simple foreign aid — gifts from wealthier nations.  Nothing is free, however, and such aid has some material disadvantages.  As a non-market tool, aid tends to warp incentives.  In addition, there are always strings attached: wealthy countries generally give aid to poor countries that matter economically or geopolitically.  The donor nation invariably expects some return on its investment, in terms of economic or political favors that impose significant burdens on the recipient nation.  Further, geopolitically unimportant countries attract relatively little foreign aid.  They may receive humanitarian aid, but that by itself is rarely sufficient.

Loans from multinational institutions like the International Monetary Fund (IMF) are a third source of capital.   Such financing poses problems similar to foreign aid:  a long-term sense of indebtedness and economic dependence on the lender.  Microloans – small capital investments that operate under a sense of social cohesiveness as collateral – are becoming more common in developing countries as well and are typically self-sustaining.

The fourth and final source of capital is private foreign investment.  If a nation can tap this source, it can fund investment and growth (i) despite any shortfalls in internal savings while (ii) avoiding the disadvantages of foreign aid and institutional loans. How does a poor developing country convince foreigners to invest?  Cao’s work focuses on fostering economic independence by creating and brokering deals that involve collaboration between local business and foreign capital.

“Most of the early pieces I wrote were looking at the Chinese system.  They are one of only a very few communist countries left and I was interested in how China has been able to plug itself into the international economic system while still maintaining strict state control.  China has had no political liberalization in any meaningful way, yet it has managed to attract tremendous foreign capital through a quasi-privatization process.”  China created a “halfway” open door policy for privatization.  It couldn’t sell whole companies off to private bidders — such complete privatization would erode its commitment to communism.  Instead, it created opportunities for private investors to purchase minority interests in enterprises.  The state would maintain control, but some shares could be privately owned.  The government thus was able to open up some enterprises to private capital without going too far down the road toward western-style capitalism.

Perhaps unsurprisingly, Chinese firms partially funded with private capital soon generated the lion’s share of profits; the majority of the state-owned enterprises were essentially bankrupt.  So the profit generated by the non-state entities had to be used to shore up the languishing state-owned enterprises.  By offering partial privatization, the Chinese government accessed private capital without relinquishing ideological communist control.  “It’s rather clever, in a Machiavellian sense,” notes Cao.

Vietnam is following the Chinese model, albeit more slowly, Cao observes.  The Vietnamese state still controls many large enterprises, but has permitted a parallel private sector to sprout.  The government encourages entrepreneurs, but funnels private profit from those endeavors back to the state.  The private sector grows within bounds carefully delineated by the Vietnamese government. 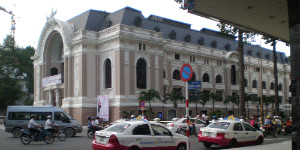 This is where it starts to get really interesting, according to Cao.  “You can’t open up state enterprises to private investors without offering at least minimal information about company holdings, finances, liabilities, and the like,” she says.  “The very idea that shareholders may have rights that they can assert against a corporate governance structure is revolutionary to a communist regime.”

These concepts of accountability and fiduciary duties to a shareholding public can become the impetus for political reform.  “If you chip away at the state regime long enough, if you keep throwing pebbles at that iron wall, eventually pebble by pebble you will erode the state machine,” Cao says.  “And if you loosen control in the economic marketplace, eventually control in the political marketplace will have to loosen as well.  The fact that these things are already happening in the economic sphere is revolutionary,” Cao notes.  “It is a huge step in the right direction.  A stone here and a pebble there will break up the homogeny of power and the monopoly that is exercised by the totalitarian state.”

Cao offers one example rooted in her own experiences leaving Vietnam.  A number of her relatives stayed behind, giving Cao the opportunity to observe secondhand what happens when a country isolates itself and relies on total state control.  “After the war,” Cao says, “millions of people fled.  Not during the war: after the war.  These were not refugees fleeing from the violence and danger of war, but millions of people fleeing a totalitarian state in search of freedom.”

“When you look at the history of the world,” Cao says, “no one ever flees toward a totalitarian communist system.  You don’t need a lot of theory to know that people yearn to be free.  And an essential part of that freedom is an economic market system that offers options and possibilities for people.  Even with all its flaws, people are drawn to a free market system.”

Cao’s singular experience and critical eye have not gone unnoticed by her colleagues at William & Mary Law School.  “Lan Cao’s experiences in Vietnam provide her not only a unique and valuable perspective into the challenges facing war-torn, poverty-stricken nations,” says Professor Nancy Combs, an expert in international criminal law, “but also the legitimacy to critique prevailing responses to those challenges.  Because Lan's scholarship is so well-informed by her experiences, she can tackle head-on some of the most controversial issues in international development, issues that other scholars prefer to side-step.  Lan's scholarship embraces these controversies and brings to the discussion the candor and credibility of one who has lived the legal issues.”

Other colleagues echo these sentiments. “Lan Cao is culturally well attuned and sensitive to the particular needs and experiences of emerging countries,” says Professor Alemante Selassie, also an expert in comparative law and development, “and because of this her scholarship focuses not simply on the relationship between law and development but specifically on the role culture plays in fostering or hindering growth – legal, institutional, and economic. What makes Lan's scholarship uniquely relevant is that it focuses on the intersection between culture and development, without distraction from the influence of the latest fad in economic policy prescriptions for captive third world nations.”

Professor Alan Meese, an expert on corporations and antitrust law, says he admires Cao’s “willingness to go against the grain.”  Meese notes, “Lan reaches results that are not always popular among folks who work in her field.  For example, her work on culture change challenges the conventional wisdom that we need agnostically to take other cultures as a given, and then still try to develop them economically.”

Cao is currently at work on a book examining cultural factors relevant to economic development.  For example, countries that routinely subordinate women seriously diminish their ability to generate wealth.  “If a country oppresses 50 percent of its populace,” she says, “it is losing out on a huge proportion of human potential.  Any culture that oppresses women and girls will continually impede its own economic development.”

Cao also maintains that new rules of law, without more, simply are not enough to guarantee robust economic growth.  “You can pass a law that says men and women are equal,” she explains, “but unless there is a massive cultural shift among the populace, unless there is a drastic cultural change in the way that egalitarianism is perceived, that law will have absolutely no effect.  You must change the cultural norms that create oppression for women, not just change the law.

“In Vietnam we have a saying: ‘The Emperor’s law stops at the village gate.’  In other words, law is meaningless unless you address the cultural changes necessary to make the law viable.”

When asked how she sees her work in the greater struggle for economic freedom and development for poor countries, Cao laughs.  “I’m just an academic,” she says, smiling.  “I write law review articles.  But I do believe that my work is part of a larger movement that is bringing the world closer to global economic freedom and loosening the bonds of oppression for women and girls.  Once you open the door to privatization, once you create gaps, however small, in the totalitarian state, we can slowly bring about political liberalism and hopefully, eventually, freedom for the oppressed, both economic and political.”

Although she has not continued the 'lesson of the birds’ with her own daughter (apparently it’s harder than one might think to buy a hundred sparrows in the U.S.), Cao’s scholarship on the importance of liberty is a legacy of her father’s devotion to positive karma and good deeds.